Released in 1992 by no-name Korean developer SIECO Ltd. for the Master System, Robocop is an unlicensed travesty that lacks the style and substance of the other Robocop titles on the console. In fact, it has almost nothing to do with Robocop at all.

The game starting is where everything begins to go wrong. The low quality title screen makes way for name entry, which is absolutely redundant, and then it is off to the first level. When the level begins you find yourself staring at a pastel coloured abomination that uses a grand total of five colours. Oh yes, I counted.

Robocop himself looks like a mascot designed to sell furniture polish and the constant flickering is enough to give you a migraine. As the level progresses you begin to grow accustomed to the awful control and woeful physics displayed in the game. Robocop controls terribly and totally unrealistically. Now, call me pedantic for picking on the realism of a mythos surrounding a mechanised crime fighter who has a machine pistol that pops out of his leg, but you’d think something made from a couple of hundred kilograms of steel wouldn’t be able to jump very high. According to SIECO however, Robocop is cable of leaping as high as a goddamn building roof. I don’t remember that scene from the movies.

Scattered around the EGA (DOS humor, look it up) looking environments are mysterious power-ups including a cross which acts as invincibility. Now, I am going to give some credit to SEICO here as in the film, Alex Murphy (the cop who is brought back as Robocop) is a devout Irish catholic. Could I be reaching to find something good to say about this game? Possibly. You can also pick up throwing knives (remember the scene where Robocop joins a circus as a knife thrower?) and pick up strange jars that fill up a “LIFE U” meter.

There is also a hilarious speed power-up that causes your mechanical monstrosity to zip across the screen faster than The Flash and crash into enemies and pits. It’s basically insuring that you die as swiftly as possible. I thought about the speed power-up and came to a conclusion regarding its functionality; it’s not actually increasing some sort of speed parameter in the player, it is literally speeding up the entire game to give you the illusion that Robocop is running faster.

The enemies in Robocop

are utterly baffling and laughable. At one point, a generic man will be shooting at you. However, later on you find yourself being bombarded with bombs by a giant bee, molested by Killer Croc and killed by a cactus throwing lunatic in a window. I have a feeling they’re meant to be grenades, but it honestly looks like someone is throwing a cactus at Robocop and killing him…with a succulent plant.
The speed at which you die in this game is totally nonsenical. Robocop is reduced from a paragon of justice and courage in the face of crime to a brittle cartoon character than can barely defend himself against a rogues gallery of cereal mascots. 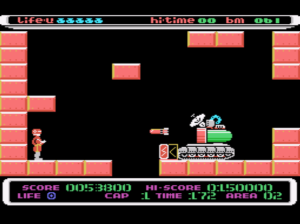 The boss fights. Oh my god, the boss fights. An endless barrage of totally unidentifiable vacuum cleaners shooting missiles at you. That is all they are. You are on one side of a pit, they are on the other. They look like vacuum cleaners and you exchange bullets until one of you dies. The only redeeming quality of these boss fights is that the bosses each have an invisible weak point that you identify by shooting them until you hear a chime sound. Then they can be killed in a few hits. This actually surprised me, as I honestly expected to be able to simply stand completely still and fire until they died.

Gangcheol Robocop is an endless parade of poor programming, terrible control, irritating power-ups, complete nonsense and utter disregard for the source material it is supposed to be based on. Do you know what this game reminds me of? Those terrible action figures you can pick up at generic dollar stores that fill up small, suburban shopping centres. They’re cheap, poorly made rip-offs of a popular thing that, once opened, reveal “Robert Cop – The Furniture of Law Enforcement.”

For the curious amongst you, I would highly recommend looking into this game. It’s a curious relic of knock off game design that makes you appreciate even generic movie licenses on Master System from the likes of Ocean and Virgin Games. 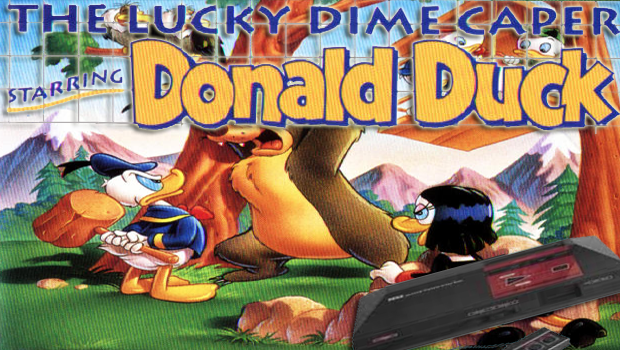