I think it’s safe to say that even the most avid gamers have holes in their knowledge and I am ashamed to say that Galaxy Force II has never really appeared on my radar to a great extent.

Oh, I had heard of the game before and I knew that it was a space-themed shooter, but for some unknown reason I always thought/assumed that it was a scrolling shooter like Zero ‘All-your-base-are-belong-to-us’ Wing or Xevious.

How wrong I was… 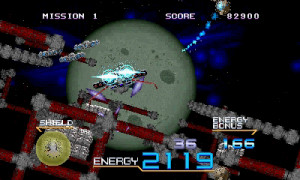 I’m going out of synch with my 3D Classics review here and starting with the gameplay portion. You see, because of my lack of knowledge and very little care of the game, I was completely shocked, to the point of almost yelling down the house, at how funking brilliant this game is!

Far from being a scrolling shooter (like I assumed it was), Galaxy Force II is in fact a 3rd person space combat game – very much along the same lines as Star Wing on the SNES or Star Fox 64 on the N64, but rather than using fancy 3D polygons, Galaxy Force II makes excellent use of using 2D sprites to create the illusion of 3D objects, such as walls, tunnels, meteors and even giant space ships.

You fly across a variety of levels with the ultimate objective of destroying the enemy’s energy sources. But that’s not the only challenge, you effectively have a time limit, in the form of your own ship’s energy.

Progressing through and completing the levels will give you energy/time boosts, but it is still a very taxing game. However, it’s also an incredibly enjoyable challenge. 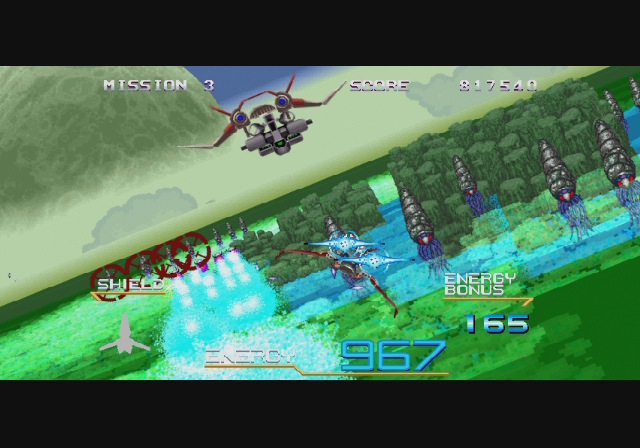 The level varieties keep you going throughout; I just wanted to see what the next environment would be. And the gameplay is totally solid – much like playing Star Wing or Star Fox, the enjoyment has held up over these years.

And one thing I found very impressive was the amount of freedom you feel you have as you fly across the different terrains. Much like Star Fox it’s a linear, always moving forward, game – but unlike Star Fox you can travel further to the left and the right, giving the feeling of some true flying freedom, and when you enter the enemy bases you often have to weave down corridors and sometimes perform full U-turns round corners – giving the illusion of flying in a 3D environment.

Even for a game that is well over 20 years old, it features things that seemed pretty unique even in the late 90’s, such damage animation on your ship. When you get hit or crash too much, your wings get damaged, sparks come out of them and your flying ability is noticeably reduced. I mean, back in 1997 on Star Fox 64 (which had a very similar damage animation) that seemed so advanced… and that was about 10 years after the released of Galaxy Force II. 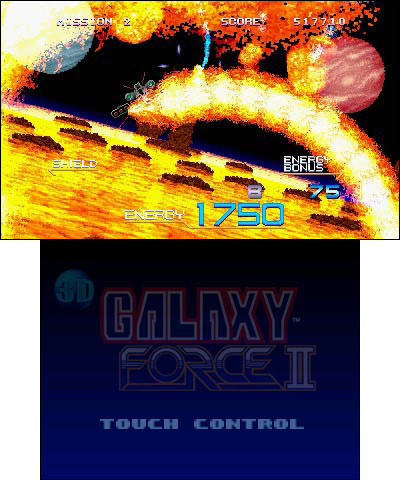 If you found the 3D effects used in Space Harrier or Super Hang-On, you haven’t seen anything until you’ve experienced Galaxy Force II.

Because the game already gives the illusions of flying in 3D environments, the 3D effects just enhance this experience and flying through the enemy bases, past meteors and underneath some impressively large space ships, you get the feeling of playing a much more modern title than you are.

Also, because of the varying level environments, you get a lovely treat with the 3D visuals on each stage. For example, the second level is set on a planet covered with a sea of lava (something Star Fox 64 definitely borrowed) and you have balls of molten lava flying at you and past you, with trails of fire following them – and these look beautiful with the 3D visuals turned up to the max on the 3DS. 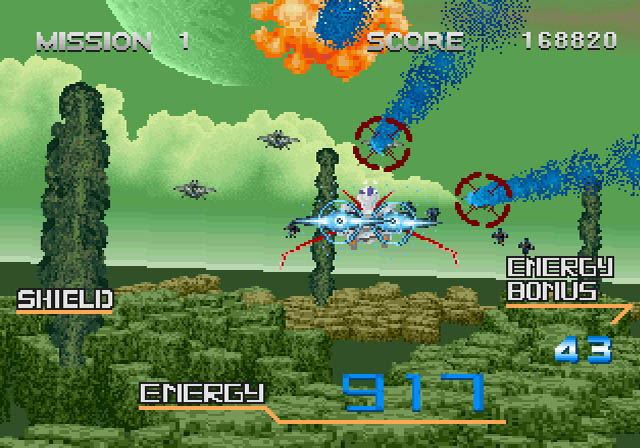 Much like the other 3D Classics, Galaxy Force II has some very familiar (and welcome) additions to it.

As I mentioned, the game is quite challenging, so it’s great to see that you can adjust your energy levels and the rate at which it decreases – making it a little easier.

You also have the ability to start from any of the first five levels (there are six in total) – meaning you still get to experience most of the game, even if you can’t complete it in the normal way. 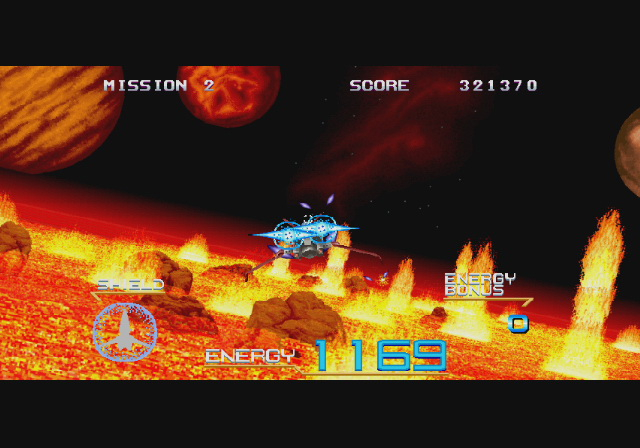 I think almost anyone can tell that I enjoyed this game. A lot.

This is the type of retro game you play and think: “Why the bloody smeg didn’t SEGA make anymore of these?!”

If you watch our Nerdcast, you may know that I have been incredibly disappointed with my 3DS purchase so far. Well Galaxy Force II has pretty much single-handedly made me glad I bought a 3DS. That’s just how much I enjoyed it.

Not only have I discovered a great retro title, but the 3D visuals completely enhance and overhaul the game to make it almost feel like I am playing a more modern title.

There are a few elements of this game that remind you how old it is, such as when you collide with an enemy – you basically get knocked awkwardly and lose all speed. But I can’t really fault the game for that. All retro games have their niggles that have been cleared up in other games over the years, and back in 1988 (when this was first released) that sort of thing wouldn’t have been such an issue to gamers.

Ultimately, I would love for SEGA to come back and make a totally new Galaxy Force title – keeping to the spirit and tradition of this style of game, just with new visuals. But, for now, Galaxy Force II holds itself well, even against more modern space shooters. 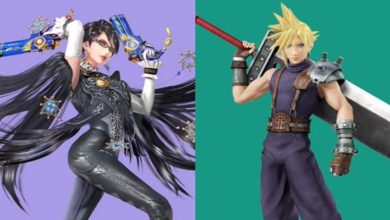