Ahh, Altered Beast. I had such a love-hate relationship with this game back in the day.

Ultimately, I loved the game on my Mega Drive, but had a massive hatred for how difficult the game seemed to get on the third level.

So was forking out over £4 for an old game with 3D visuals really worth it? Let’s do this!

Unlike Space Harrier, I don’t think the 3D adds quite as much to Altered Beast. The 3D looks pretty good, with items in the background and foreground offering the illusion of depth, but it hasn’t changed the game for me the way Space Harrier did.

I think though, being such an old arcade game and one of the earliest Mega Drive games, it must have been a bit tricky for SEGA to really push the 3D visuals – you don’t have quite the same parallaxing backdrops some later games offered, or even the advanced enemy attacks. It’s ultimately a pretty basic game.

Ok, now this is where I feel 3D Altered Beast perks up a bit. The optional settings you can go through, will change the gameplay a bit, but there is one particular feature that I am so happy with – the ability to have random beasts on each level.

I mentioned at the start how I used to hate how difficult the game became around level 3. Well that was because of the beast you were given. Level 1 had the classic Wolf, level 2 had the epic Dragon (who, let’s face it was too good) and then level 3 you had the Bear … the bear was crap.

It was kind of slow, it had the ridiculously short-ranged breath attack and then the weirdly difficult to control spinning, jumping, roll attack. Well it was fine against the standard enemies, but the boss battle, I always found too hard with the bear.

My friends and I never seemed to be able to get past the 3rd level boss using the bear – luckily we found a cheat that allowed you to choose each beast for each level (oh yeah, that was a good one) and we could beat that boss easily with ANY other beast.

Sorry, I’ve gone off on a tangent. The random beast option – basically with this selected, you never know what beast you are going to turn in to on each level and more often you are a different beast to what the level default should be – meaning that I (almost) never have to fight the 3rd level boss with the bear! Yes!

[And just to note, I can defeat any other boss with the bear – just not the 3rd one… weird, no?]

So I’m so happy this option exists. Plus there’s a variety of other options for gamers to select…

Well it’s Altered Beast, you walk along, kicking enemies (no one ever punches, let’s face it) – then find a blue pig, gain your powerups and ultimately turn into a beast and then immediately fight the boss.

The gameplay hasn’t changed at all and while I do appreciate that and do quite enjoy Altered Beast still, I just think there are better games from the era.

You can finish the game easily within about 20 minutes. And you might come back and play it once in a while, but I don’t think it has quite the addictive appeal that some other classics still have.

One great thing that I’m happy they included is a local two-player mode. Pity it’s not full online, but it’s still great to be able to play this game with a compadre.

Why the smeg did they do that?! 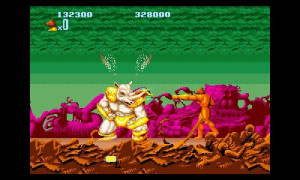 Thankfully there isn’t really anything wrong or out of place with 3D Altered Beast – unlike the issue of sound Space Harrier experienced.

So nothing to complain about.

3D Altered Beast is a weird one. There is ultimately nothing wrong with it – but I still found that I wasn’t enjoying it as much as I did back in the day.

I think that while gamers will still have some fun with this title, the game just doesn’t spark as much enthusiasm from me as some of the other 3D SEGA Classics (as you’ll see).

At the end of the day I can’t really fault this version, it’s a very solid port – so if you like the original, you’ll like this. 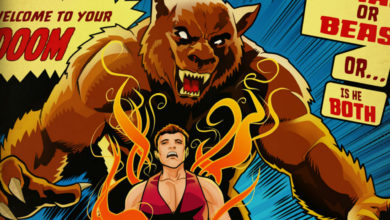