For those who don’t know anything about The Cave, the game was originally released in January this year on PC, XBLA and PSN. Created by adventure/puzzle/point ‘n click gaming legend, Ron Gilbert, (possibly best known for his work on several LucasArts titles, including the Monkey Island franchise and Maniac Mansion), it has now made its way to iOS devices.

…And now I’m going to continue this review using lyrics and song titles from Take That’s back-catalogue for the sub-headings (just for the hell of it). 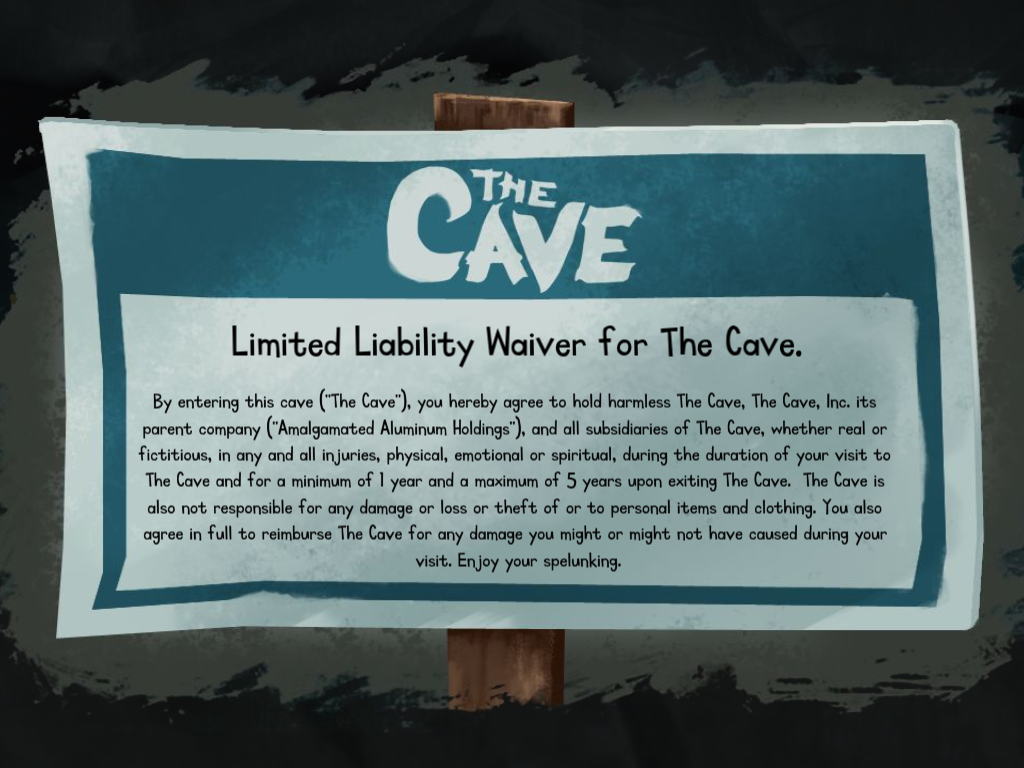 The Cave follows along a similar vein to Ron’s Maniac Mansion – in that you have a variety of characters to choose from, but can only play as three at a time. Many of the puzzles require you to use all three characters – for example, one might need to use an item somewhere in the area, while at the same time another needs to flick a switch and the third is needed to run through a door or something that’s been activated by the other two’s actions.

Each character has a unique ability and their own backstory, which comes into play during the game and pretty much guarantees additional playthroughs (I’ll come to that in a bit). 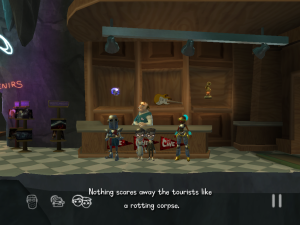 Everything changes but you

Essentially the biggest and most obvious change in the game is moving from the standard keyboard/controller option to touch controls. Other than that, there seems to be very little difference between the home console and the mobile versions.

The visuals may look a little sharper on the home platforms though, however the animations and quirky visual appearance remains the same, which is a good thing.

Again, audio wise, The Cave iOS has kept things identical with the home platforms, including the sultry tones of The Cave itself… yes that’s right, ‘The Cave‘ that’s referred to in the game’s title is alive and telling the story as it guides your chosen characters through its puzzles.

And it’s essential that the audio has kept up with the console versions, as it is the audio which really does give the game its essential charm and appeal. Most of the game’s humour comes from The Cave either directing you, explaining various traits of the characters or just commenting on when you do something stupid.

I would also encourage gamers who might be playing on public transport to ensure they have headphones with them. Not only out of respect for your fellow passengers, but just so that you have the best gaming experience.

If you are like me on public transport, I always turn my volume down on games (to avoid angry glares from passengers), but with The Cave, as I’ve said, the humour and The Cave‘s banter is partly what makes the game enjoyable – so do yourself a favour, play with headphones on.

Basically the only frustrating thing about The Cave iOS (especially compared to the console versions) is the controls.

Generally the touch controls work fine. They are basic (which is good) and obvious – so anyone can pick up and play the game. You touch on the screen where you want your characters to go, objects that you can pick up, manipulate or use for puzzles are highlighted when you approach and you tap on the objects to utilise them.

However, there are times when this basic single tap function falls flat. A good example is near the start of the game when you have to bring three items back to a guy. Once you have the items, you have to take an elevator back up to the guy to finish that particular puzzle. Each of your characters is now holding an object. You direct two characters to get on the lift and the third you use to hit the switch next to the lift to activate it. Now, in theory, you are able to hold the item, hit the switch and then step onto the lift. But when I tried it, my character dropped the item, I then tried to pick it up again, but because I was still in front of the switch, I ended up activating the elevator, I then scrambled to pick up the item and ended up missing my ride to the surface.

Fortunately, in this situation, I could just wait and get back on the lift, but it was a frustrating moment and literally the only reason it happened was because of the controls.

Another issue is jumping. To move left or right, you tap on the screen where you need to go. To jump, you tap higher on the screen, usually in the direction or the place you need to jump to. Most of the time, this works fine but, again, there were several times that my characters would just fall off ledges or only half-heartedly jump and ultimately plummet to their deaths.

One other annoyance I had, which wasn’t related to the controls, was not realising that the characters had special abilities. Now, I don’t like it when games hold your hands, but either the game doesn’t tell you about your characters having unique traits or I completely missed it near the beginning.

But, essentially, depending on the characters you choose, you visit unique areas of The Cave related to a specific character. These areas tend to have puzzles catered to said character and you need to use that character’s ability to get past puzzles and traps.

I came to a point in the game where you needed an ability to get past some flames, and I was totally stumped. I ended up doing a quick search online about the game … LUCKILY, I didn’t actually have to go to a guide; I read a quick blurb about the special abilities and how to use them and was back in the game. 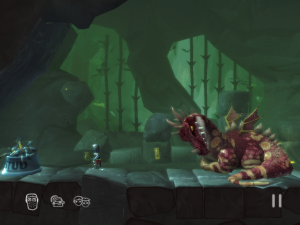 Get past the fiddly controls and work out how to use your character’s special abilities, and you’ll soon find The Cave to be a genuinely entertaining ride. The characters you control are all different enough and deeply charming, that you really get involved in their own personal ‘quests’ (so to speak) – as they each have their own reasons for being there.

One thing that I should note though is that The Cave‘s puzzles are no way near as taxing as many of Ron Gilbert’s back catalogue, or other point ‘n click games. Now this could be a blessing for many gamers, but a let-down for others.

Personally, I’m happy the puzzles weren’t too tricky – as occasionally in the Monkey Island games, I would spend hours on a puzzle and feel like a right idiot once I worked it out. And don’t get me started on the Discworld games – as much as I loved them, I swear they were impossible to finish without the help of a guide or a friend who had completed the game before you… by using a guide.

And, for anyone who does enjoy the harder puzzle games, I wouldn’t be too disheartened. Most of the puzzles will engage your brain enough, to make you sit and think for a minute or two – and (more importantly) the style of The Cave is pretty different to games like Monkey Island, because The Cave has more platforming and real-time based puzzles (like having to activate a switch and do ‘something’ within a certain time). 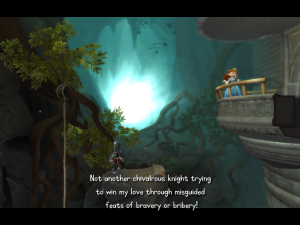 One of the key elements of the game, as mentioned briefly before, is the characters themselves. As I said, depending on the character selection you have, you will visit unique locations in The Cave. This means that, as you can only choose three characters to play through as, each time you play the game, you will come across entirely new areas, each with its own selection of puzzles catered to that character.

For example, the Knight’s area is a Medieval Castle – where you have to win the love of a princess and fight a dragon. You do use your other character’s to help out, but in this location, the Knight’s unique ability is mostly used and he becomes the key character to play as to get past most of the puzzles.

I love this, simply because it means the characters have a purpose in the game. You aren’t just getting an extra story, you have having all new puzzles and gameplay experiences based on your choice of characters.

It also encourages you to play through the game multiple times – and it doesn’t feel so cheap like some other games in that respect.

And because The Cave shares elements with platforming/adventure titles, it encourages exploration – leading to finding things like cave paintings, which reveal parts of the character’s backstories. But don’t worry, from my play through, I didn’t have to go too far out of my way during explorations, but it’s nice to find little hidden areas and titbits.

In many ways, I prefer The Cave being on a mobile device. It was fun on the consoles, but the game lends itself so well to more casual playing – because it is so relaxed in its gameplay approach, that I feel I do prefer the iOS version of the game to the Xbox and Playstation ones.

However, the game’s simplistic control style is both a gift and a curse, especially when the game gets confused as to whether you want to flick a switch, or drop an item – or if you want to jump across a gap, or plummet to your death. As a result, it is more frustrating than the console versions, though still enjoyable.

+ Easy, fun gameplay
+ Humorous and enjoyable
+ Lends itself well to mobile devices
+ Puzzles are entertaining and not too taxing for average gamers