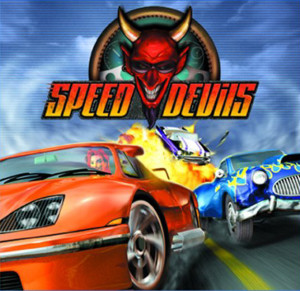 [Retro Roundup takes a look back at the games in different genres on different SEGA platforms. Each week we look at a single game, rate how well it has held up over time and then, after we have reviewed all (or as many) of the games in the same genre – we give you a roundup of our top three.]

Our first selection of Retro Roundups focuses on Dreamcast Racers.

In this week’s roundup of Dreamcast Racers we take a look at Speed Devils. So, how has this quirky arcade-style racer held up over the years?

One of the Dreamcast’s European launch titles, the Ubisoft-developed Speed Devils is an arcade-style racer, where players earn money (and respect) as they work their way up the ranks.

The difference with Speed Devils compared to most racers is that opponents can wage bets or challenge you for your vehicle and each track has its own obstacles or environmental challenges to overcome.

It received generally favourable scores at its launch scoring in the 70’s (annoyingly the game is no longer on Meta Critic – so it’s hard to give an accurate average) and later came out with an update version of the game, Speed Devils Online – offering pretty much the same single player experience as the original, but with an added online gameplay mode and 11 new cars.

How has it held up?

[Note – we realise that comparing retro games directly to new ones is pointless. But here we are looking at whether things like the visuals have held up over the years – to an extent that the game is still playable and not marred by dodgy retro graphics/sound/gameplay or control]

Generally the graphics hold up pretty well these days. There are several obstacles (like a bus or paraglider) that move around on the track and have horrific frame rates – but they don’t affect the speed of the game directly.

The draw distance is high and there is little-to-no pop-up. The vehicle detail is well done, with shiny new looking cars to start with and then (usually by the end of one race) really beaten up and grubby vehicles.

An example [SPOILER ALERT] would be when driving in ‘Hollywood’ compared to ‘Hollywood Disaster’ – the Hollywood track is pretty subdued, you have a mechanical T-Rex running amok and a giant gorilla sitting by the track, that tries to hit you – but they are easy to avoid. But race in Hollywood Disaster and you have those objects, plus a lighting storm that brings part of the famous Hollywood sign crashing down on part of the track, the road itself at one point also starts to split apart with an earthquake and a gas station explodes on one lap as lightning hits it. It gets pretty mental! [END SPOILER]

The standard engine sounds are all there and are fine. But some of the environmental sounds are an nice treat for the game – like hearing the sound change as you drive across different surface types during a race.

The music is a weird situation. Generally I love the soundtrack, but none of it is really memorable – unlike some games where you end up humming music even after you switch it off, Speed Devils’ music stays only during gameplay.

The music also seems very muted compared to most games – very much a background noise.

But still what you do hear during the races is very solid and works well with the different environments.

Now this is where Speed Devils really shines through for me. If you are after a realistic or serious racer, you’ve come to the wrong place.

While the game is set in real world locations, the tracks are all made up and what you see during races is certainly not life-like – for example a giant bird thing in Mexico, or a UFO crash-landing in Nevada.

The basic driving gameplay is still solid, even today. Handling on the vehicles differs which each one – and once you repair and upgrade your car, you will really notice a difference in performance. Weather alos affects the perforamance of vehicles – so be sure to check your race schedule and select the right tyres for the job before racing.

Each track has a main route to follow, but also some hidden paths and shortcuts. Now these shortcuts actually varied depending on the time of day (in game) you raced or the season of the track. For example in Aspen’s winter track you can drive over a frozen lake, but in the spring, it’s very much a large pool of liquid and your car will sink.

The fun environmental disasters and obstacles really add something to each race. None of the moving obstacles are ever harmful enough to piss you off, but if your brain switches off and you start driving in a sort of auto-pilot, you will get into trouble if a tornado, T-Rex or Hollywood sign (hit by lightning) gets in your way.

Another enjoyable aspect is earning money and taking bets. Most games you earn money to buy upgrades or new cars – well you can do all that in Speed Devils, but you can also gamble your savings away.

Once you start to make a name for yourself (by winning races) the opponents will start throwing challenges at you – like bursting police radars, or getting the fastest lap (and more) – all of which will earn you some extra cash fast. But if you lose, you lose that money.

In the more advanced classes you have ‘Vendetta Races’ – where an opponent will challenge you to a private race and the winner takes the other’s car.

So, should you lose, you do actually lose your vehicle and if you don’t have the bunse to buy a new one, then it’s game over. A nice added touch is that (after winning) when you go back to racing, you will see that person you beat is no longer able to race, until the season is over. If you repeat the same class (starting a new season) then that racer will return, but usually in one of the cheapest vehicles in the game.

Is it still worth buying?

I would say a definite yes!

The two player is a bit lacklustre, but the single player championship mode is definitely one of the most enjoyable I have come across in any racing game. Just don’t expect the level of depth or realism one might find from racers like Gran Turismo, Project Gotham or Forza.

Being an average-rated game at launch, Speed Devils should be reasonably priced these days. So if you want to add a fun racer to your collection, then this shouldn’t be too hard to pick up. Or, alternatively, look for the quasi-but-not-really-sequel, Speed Devils Online – as that is basically the same, but with an added track and a load of new vehicles to buy – plus the online mode (which I believe is offline now –  unfortunately).